About LED Back light driving methods

I. Introduction:
LED back lights on LCD modules are generally driven with a DC voltage through a
current limiting resistor. This simple approach is perfectly acceptable for most
applications. When the primary consideration is an extra bright display, the lowest
possible power consumption, or a back light that can be controlled over a very wide
brightness range another method is needed. The purpose of the paper is to describe this
method.

II. Description:
By using a pulse width modulation scheme several advantages can be realized over the
simple DC voltage method. The main advantage is in efficiency. The LED’s are pulsed
with a high current for a short period of time. For example consider the HDM16216L-7.
The nominal LED driving current for this display is 120 mA which produces a typical
brightness of 50 NIT. If, instead of a DC or constant current, we apply5 times the current,
600ma, for 1/5 of the time, the average current is the same, 120ma. See Figure #1. The
average brightness of the LED would also be the same if measured electronically. The
difference is in the perceived brightness

The human eye has a certain amount of persistence. If exposed to a bright light the eye
will “remember” the light for a short period of time. This allows us to view a motion
picture or TV screen as a steady image when in fact it is flickering at 24 to 30 times a
second. When the LED is flashed on brightly for a short time and then turned off the eye
“remembers” the light at the high brightness level. The result is that the perceived
brightness of the back light is closer to the high pulsed brightness than to the lower DC
brightness.

This effect can be used to advantage in several ways. If the brightest possible back light is needed the display can be pulsed at a 1:4 on/off ratio with5 times the typical current. The pulse repetition frequency should be greater than 100Hz so the flickering is not perceptible to the eye but not greater than about 1kHz.

This technique can also be used to give a “normal” looking brightness level to the display
but at a lower average current to save power. The average power can be cut by a factor
of at least 50% to produce a given perceived brightness level. This can be a big advantage in battery operated equipment.

The third use of this method is to facilitate a wide range brightness control for the LED
back light. By varying the on/off ratio a very wide range of brightness can be achieved
while maintaining a very even appearing back light. See Figure #2. One can also very the
brightness by simply varying the DC current to the LED’s but at low current the individual
LED emitters start to become visible resulting in an uneven looking back light. To implement this technique the peak current should be set at the specified typical current for the display and the on/off ration of the pulses varied from near 100% on to near 0% on. 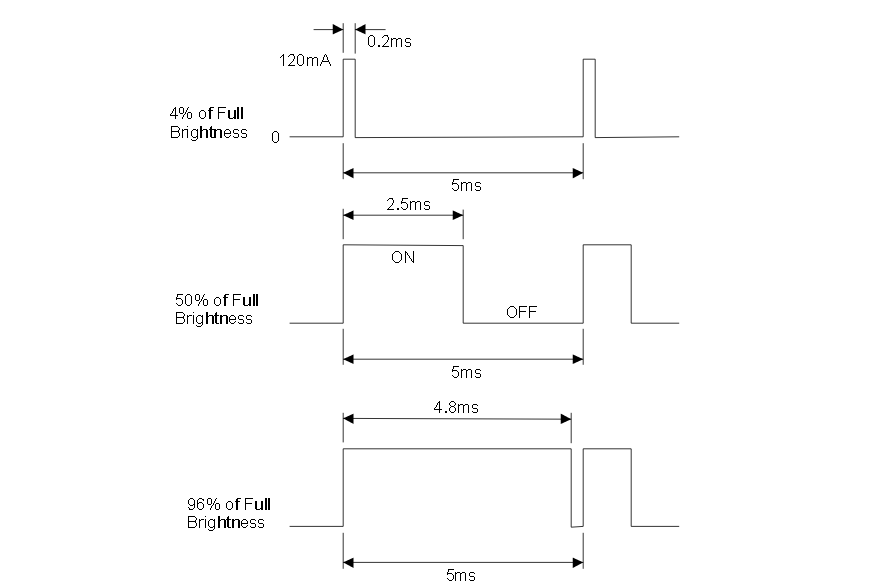